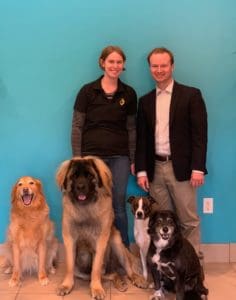 Steve and Holly Mayoras started Pooch At Play in 2010 to provide a safe place for pups while their parents were at work or school.

After graduating with an Animal Science degree from Purdue University, Steve’s first job was as a supervisor at a busy manufacturing plant, and the long hours he worked kept his dog, Moose, home alone for long periods of time. Steve had lived many other areas in his youth where doggie daycares were more prominant, giving owners the options to find care for their pup while they were away from home. He decided to leave his supervisor job to start the dog daycare he designed while attending school – and Pooch At Play was born.

Holly, a friend and lifelong dog lover, was still in college when Pooch at Play opened. She happily accepted a job at the new business, watching the walls go up and helping it transform into a thriving business. Holly joined as a life and business partner in 2012 when she and Steve got married. She has been operating it ever since.

In 2016, Pooch At Play had outgrown the walls of it’s original home and moved to where it is today, letting the buisness grow even larger. The expansion allowed them to add more exciting things for the pups to do during the day, such as extra play areas and a large outdoor space.

Steve and Holly now have four dogs that get to come help at work everyday – and thanks to Pooch At Play, never again will they, or anyone else’s pups in Greater Lafayette, have to be stuck home alone while mom and dad are at work or school!